Treatment of bimaxillary dentoalveolar protrusion often involves the extraction of four first premolars. Since these patients often have Class I molar relationships, the objective is usually to reduce the lip protrusion and correct the incisor inclinations with the least amount of anchorage loss. Although headgear has historically been the standard for maximum anchorage, its intermittent force application and requirement for patient compliance have led clinicians to search for alternative techniques, including mini-implants. In addition, various space-closure strategies have been used, including separate canine retraction, en masse anterior retraction, and differential-moment retraction.

The differential-moment approach produces bodily translation of the anchor units and a controlled tipping of the active units. Since the tipping movement is faster, it allows the active units to move first, resulting in a minimal loss of anchorage. Each anchor unit comprises multiple teeth, creating the effect of a large, multirooted tooth that resists displacement.

In patients with four first premolar extractions, the active unit and the anchor unit are two distinct entities. When en masse retraction is attempted, the posterior anchorage unit traditionally consists of the second molar, first molar, and second premolar. This group of teeth is bonded and aligned until a heavy segment of approximately .018" x .025" stainless steel wire can be inserted. At the same time, the six anterior teeth are aligned with a sectional wire. Once the two units are defined, the retraction assembly is placed. Although the anchor unit is generally the same with any kind of intrusion mechanics, the retraction assembly may vary.

This article presents an innovative intrusion-retraction method using fiber-reinforced composite (FRC) to provide a completely rigid anchor unit for controlled retraction of the anterior teeth. Because the mechanism applies a constant force throughout space closure, fewer and shorter appointments are needed--merely to check the integrity of the appliance. The well-aligned buccal segments are maintained in ideal occlusion until the finishing stage, when detailing is accomplished with brackets on all the teeth.

FRC is a conglomerate of fibers made out of S-glass in a bisGMA matrix, incorporating unfilled composite material to obtain a glass-like, highly resistant structure. It has the same tone as the natural dentition, which makes it appealing to patients who demand inconspicuous appliances. FRC has recently been advocated as an esthetic method for splinting teeth, and case reports have been published in both the prosthodontic and orthodontic literature.

A 23-year-old female presented with the chief complaint that "my teeth stick out" and with active decay on the distal surface of the upper right first premolar. She had a normal facial form with no asymmetries, but exhibited bimaxillary dentoalveolar protrusion in the hard- and soft-tissue profiles (Fig. 1). Vertically, the patient had a flat mandibular plane angle and a slightly deficient lower facial height. The molars were in Class I occlusion, with flared upper and lower incisors, inadequate overbite, and protrusive upper and lower lips.

Treatment objectives were to reduce the lip protrusion and correct the axial inclinations of the anterior teeth. Extracting the four first premolars offered the greatest potential for retraction of the anterior teeth; other extraction combinations would probably not have had as much impact on the soft-tissue profile.

Splint-It FRC was bonded in all four quadrants from the second premolars to the second molars (Fig. 2). Brackets were bonded to the first molars (on top of the FRC) and from canine to canine. After preliminary alignment was obtained (Fig. 3), .018" stainless steel archwires were placed, with gable bends about one-third of the distance from the first molars to the canines. Nitanium nickel titanium coil springs were added between the molars and the canines to retract the anterior segments, which were ligated together from canine to canine (Fig. 4).

Space closure was completed in seven months without any major adjustments. The FRC was then removed, and brackets were bonded to the second premolars for finishing and detailing (Fig. 5).

Post-treatment cephalometric analysis revealed a fair amount of incisor retraction by controlled tipping and excellent anchorage control of both the maxillary and mandibular molars. The soft-tissue objectives were met by achieving a significant reduction in the lip protrusion.

FRC provides an ideal means of achieving anchorage control in the treatment of bimaxillary protrusion through a differential-moment approach. The active and reactive (anchor) units can be well defined, so that light, continuous force systems with low deflection rates can be allowed to work with only slight adjustments. In this era of esthetic dentistry, the translucent FRC offers an alternative to other clear orthodontic appliances, with better three-dimensional control. 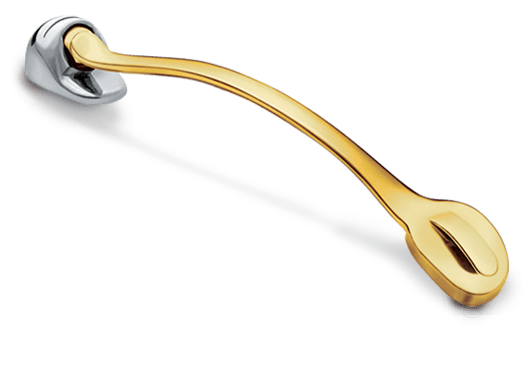